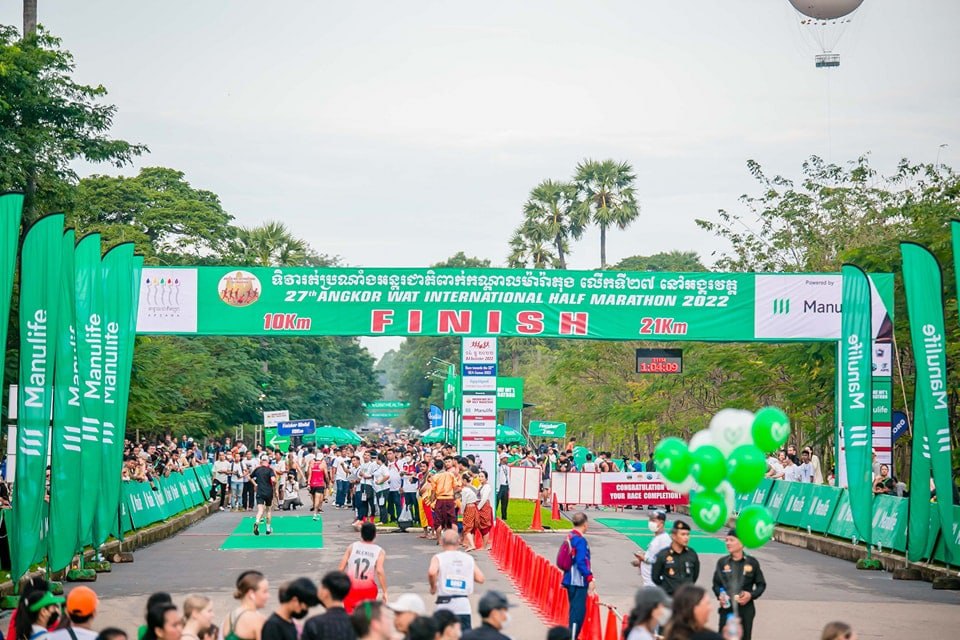 The 27th edition of the Angkor Wat International Half Marathon on Sunday drew nearly 8,000 participants from 69 countries, according to the National Olympic Committee of Cambodia (NOCC).

The NOCC organised the annual event together with the Cambodia Events Organizer and Ministry of Tourism. Manulife is the main sponsor.

How any people took part in the Angkor Wat International Half Marathon?

There were 5,814 Cambodians who joined the race, together with 1,720 foreigners, mainly from the United States (US), United Kingdom and France.

The runners competed in five categories: 21k half marathon, 10k, 5k and 3k.

A wheelchair half marathon was also on the list. The event prides itself as being inclusive, hence the addition of events for disabled persons.

In the past, there were more categories for disabled participants.

Tourism Minister Thong Khon told the participants and other people gathered at the site that he was happy that the event is back to normal after the ravages of the COVID-19 pandemic.

“The tourism sector is also recovering,” he said.

The 2020 edition of the Angkor Wat International Half Marathon was held online due to the raging pandemic. The 2021 edition, which was held in early 2022, was limited to 2,500 participants due to the same reason.

Takizaki Kuniaki topped the men’s half marathon with a time of 1:18:14, with Kong Sambath of Cambodia a close second at 1:1915. Third place went Mikaye Takaki of Japan, who finished the course in 1:20:50.

The Japanese are heavily involved in racing competitions in Cambodia. In fact, one of the founders of the Angkor Wat International Half Marathon is Yuko Arimori, an Olympic silver medalist and one of the most famous marathoners from Japan.

Arimori was also present last Sunday, together with many prominent Cambodians.

“First time for me to run in an international half marathon in Angkor Wat. It was really amazing day for me. This moment is going to be engraved in my memory forever,” a participant named Tony Yao posted on Facebook.

Many foreigners, including many of the top runners from all parts of the world, come to Cambodia solely for the Angkor Wat International Half Marathon, one of the very few events that allow participants to run through Cambodia’s most famous tourist destination.

NOCC Secretary-General Vath Chamroeun earlier said that the money raised from the event will go to the Kantha Bopha Children’s Hospital and other organisations engaged in charitable activities.

The first edition of the event was held in 1996.