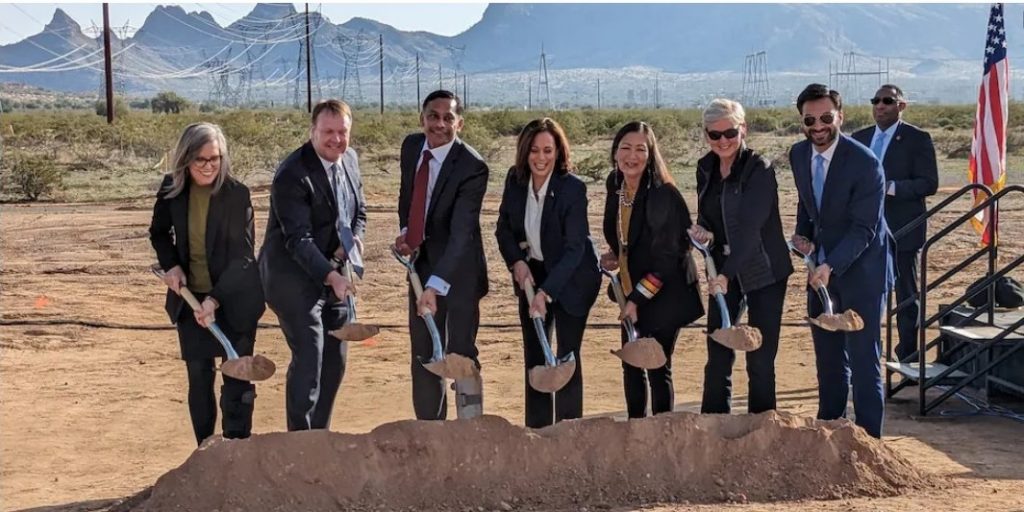 Vice President Kamala Harris and Federal officials joined with Arizona and California leaders, members of Lotus Infrastructure Partners, the California Independent Systems Operator (CAISO) and other dignitaries yesterday, January 19, 2023, to commemorate the groundbreaking of Ten West Link, a 125-mile high-voltage transmission project that will enhance the western electric grid and bring more than 3,000 Megawatts of renewable energy resources to consumers throughout California and the Desert Southwest.

The event took place just west of Tonopah, AZ near the Delaney Substation, where the project will connect to the Arizona electric grid before traveling westward into California.

In her comments, Vice President Harris remarked, “America is at the start of an historic transition away from fossil fuel plants that pollute our communities and toward cleaner and safer energy sources. To create this clean energy future, we must construct thousands of miles of new high-voltage transmission lines all across our country. All of this also creates jobs — good-paying jobs, union jobs.  Jobs for IBEW linemen who will build and repair these lines.  Jobs for young people looking to start a career in clean energy and the clean energy economy.  Jobs that will help our nation finally take on the climate crisis as the crisis that it is.”

Ten West Link will improve grid efficiency and reliability, while enabling new renewable energy and energy storage resources.  At its peak, construction will bring more than 350 jobs to the region, including more than 250 union construction jobs. When completed, this new transmission superhighway will have the initial capacity to transmit 3,200MW between Central Arizona and Southern California, improving the reliability of the bulk power system serving the two regions, while reducing costs to ratepayers. Additionally, Ten West Link will facilitate development of new renewable energy solar and solar plus storage resources in the rapidly growing Desert Southwest region.

“This new transmission line will accelerate our nation’s transition to a clean energy economy by unlocking renewable resources, creating jobs, lowering costs, and boosting local economies,” said Secretary of the Interior Deb Haaland. “Through robust engagement with states, cities and Tribes, the Interior Department is committed to diversifying the nation’s renewable energy portfolio while at the same time combatting climate change and investing in communities.”

“Today’s announcement showcases the exciting potential of building reliable energy infrastructure that harvests abundant American-grown clean energy. The Biden-Harris Administration is determined to create good-paying, unions jobs while addressing climate change head-on—and we’ll continue to see projects like Ten West being made in every pocket of the nation for years to come,” said U.S. Secretary of Energy Jennifer M. Granholm. “Thanks to President Biden’s historic clean energy and climate laws, we finally have the resources we need to build out this new economy on American soil, with American workers.”

Elliot Mainzer, President and CEO of CAISO, said, “Ten West Link will expand access to renewable energy resources for consumers across the region and contribute to the reliability of one of the world’s largest and most modern power grids. We are pleased to collaborate with Lotus Infrastructure Partners to bring this important project to life, and congratulate the project team on reaching this significant milestone.”

Himanshu Saxena, Chairman and Chief Executive Officer of Lotus Infrastructure Partners, said, “On behalf of the entire team of professionals responsible for developing this incredible project, I want to thank Vice President Harris, Secretary Haaland, Secretary Granholm, Governor Hobbs, National Climate Advisor Zaidi, CAISO CEO Mainzer and all the local, state and federal officials for the role they played in making today possible. I especially want to acknowledge the vision and foresight that the CAISO had to lay the groundwork for this critical grid infrastructure project and the strong support we’ve received from the Bureau of Land Management, the Federal Permitting Improvement Steering Council and dozens of Federal, State, and local agencies and jurisdictions in its development.”

Ten West Link was developed by DCR Transmission, L.L.C. (DCRT), a joint venture led by affiliates of Lotus Infrastructure Partners. DCRT closed on non-recourse project financing for Ten West Link on October 31, 2022. Construction financing was led by MUFG Bank, Ltd. (MUFG), Société Générale (SocGen), and ING Capital LLC (ING). MUFG is acting as the Administrative Agent for the debt facility and SocGen acted as Documentation Agent.  ING acted as the Green Loan Structuring Agent, and the debt facility was structured in alignment with LMA, APLMA, and LSTA’s Green Loan Principles.  Construction activities commenced in late 2022 and the project is expected to come online in 2024.

Ten West Link will be under the operational control of the CAISO, with more than 7,000 Megawatts of renewable energy resources currently applying to interconnect to the bulk transmission grid via the line. The project’s role in unlocking these potential renewable resources attracted green loan financing, in recognition of the substantial contribution of Ten West Link to environmental objectives in the region.