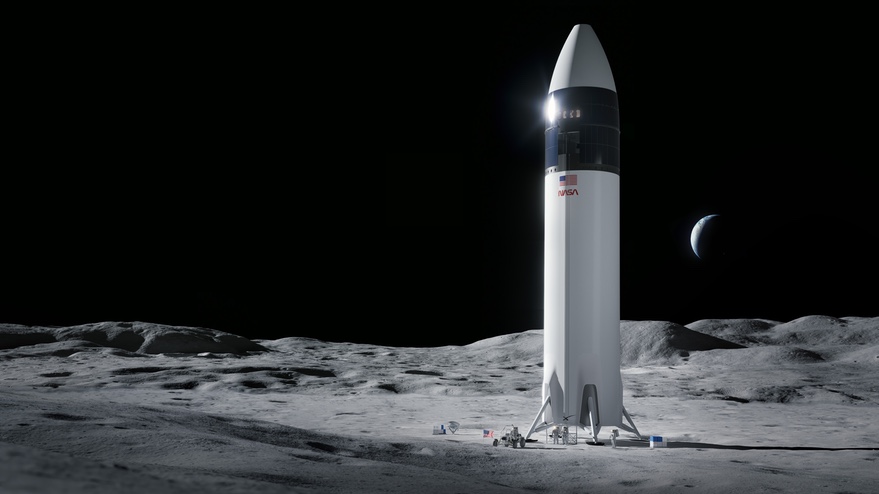 NASA announced Nov. 15 it completed a contract modification for what is formally known as Option B of its Human Landing System (HLS) contract with SpaceX. Option B covers upgrades to the Starship lander originally selected for HLS by NASA in April 2021 for $2.9 billion. The option also includes a second crewed demonstration landing mission.

“Continuing our collaborative efforts with SpaceX through Option B furthers our resilient plans for regular crewed transportation to the lunar surface and establishing a long-term human presence under Artemis,” Lisa Watson-Morgan, NASA HLS program manager, said in a statement. “This critical work will help us focus on the development of sustainable, service-based lunar landers anchored to NASA’s requirements for regularly recurring missions to the lunar surface.”

NASA announced its intent to exercise Option B in March when it unveiled its Sustaining Lunar Development (SLD) effort to fund development of a second Artemis crewed lunar lander. SpaceX could not compete for the SLD award, but NASA said it would instead exercise the option in SpaceX’s original HLS award to upgrade Starship for later Artemis missions that will carry more astronauts and remain on the moon for longer periods.

When NASA announced its intent to exercise Option B, it was not clear when that second mission would fly. However, agency officials said last month that the Option B mission would be Artemis 4, a mission that NASA previously planned to devote to work on the lunar Gateway and not include a landing. The lander selected for development under SLD would fly its demonstration mission no earlier than Artemis 5.

SpaceX is continuing preparations for a first orbital launch attempt of Starship at its Boca Chica, Texas, test site. In a Nov. 14 static-fire test, SpaceX fired 14 of 33 Raptor engines in the vehicle’s Super Heavy booster, the most ignited in a single test. Elon Musk, chief executive of SpaceX, tweeted afterwards that the company would follow the test with a 20-second engine test, “possibly one more static fire, then orbital launch attempt.”

At an Oct. 31 meeting of the NASA Advisory Council’s Human Exploration and Operations Committee, Mark Kirasich, deputy associate administrator for Artemis Campaign Development at NASA, said the first Starship orbital launch attempt could take place as soon as early December. That schedule depended on both testing of the vehicle as well as receipt of a launch license from the Federal Aviation Administration. He said NASA was closely following that upcoming test flight as one of the milestones in the development of the lunar lander version of Starship.

NASA is currently soliciting proposals for the second Artemis lander, with a Dec. 6 deadline. The agency expects to make an award for that lander in June 2023.