OneWeb two launches away from going global after SpaceX mission 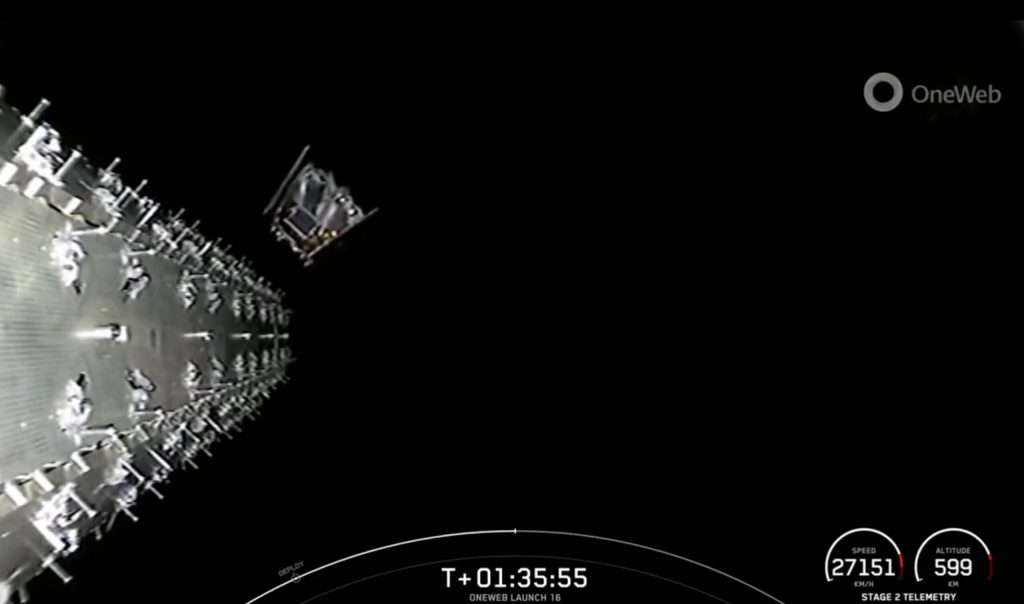 TAMPA, Fla. — OneWeb is now just two launches away from being able to provide broadband globally after SpaceX sent its latest batch of satellites to orbit Jan. 9.

The British operator has confirmed contact with all 40 satellites that launched aboard a Falcon 9 at 11:50 p.m. Eastern from Cape Canaveral Space Force Station, Florida.

SpaceX had previously used the booster to launch NASA’s CRS-26 cargo run to the International Space Station in November.

OneWeb said it now has 542 of 648 satellites in its proposed low Earth orbit (LEO) constellation, although its latest batch and another that SpaceX launched in December are still making their way to their final destinations to start operations.

It will take about 100 days from launch for both batches of satellites to be ready to start providing services, according to OneWeb.

The operator said it is currently providing connectivity solutions via distribution partners in Alaska, Canada, the United Kingdom, Greenland and the wider Arctic area.

The latest satellites will help extend its reach into Southern Europe, the United States, North Africa, the Middle East, Japan, Australia, and India.

OneWeb has said it only needs 588 satellites to provide global, high-speed broadband in places it has regulatory approval to operate. The remaining 60 spacecraft will serve as a mix of in-orbit and ground spares.

SpaceX and New Space India Limited (NSIL), the commercial arm of India’s space agency, are slated to perform one launch each early this year to enable OneWeb to provide global coverage.

OneWeb last year ordered three and two launches from SpaceX and NSIL, respectively, to deploy the satellites needed to reach global coverage, after suspending a contract with Arianespace to achieve this via Russian Soyuz rockets amid Russia’s war in Ukraine.

SpaceX kicked off its launch campaign for OneWeb Dec. 8 by sending 40 satellites to LEO on a Falcon 9.

SpaceX had been due to launch a batch of satellites for its rival Starlink broadband constellation about 35 minutes before its latest OneWeb mission from Vandenberg Space Force Base, California.

However, SpaceX rescheduled this mission to Jan. 11 at 12:35 A.M. following bad weather.

SpaceX has launched more than 3,600 Starlink satellites to date as the company fills out the network’s global reach.

The company has the approval to launch 4,408 first-generation Starlink satellites, and 7,500 of the nearly 30,000 satellites in its proposed second-generation constellation.

At the end of last year, a Falcon 9 launched the first Starlink satellites going to orbits authorized for SpaceX’s second-generation system.

However, with 54 satellites on that mission, they do not appear to be the larger versions of the Starlink spacecraft that have been proposed for its second-generation network.