SpaceX launches 40 satellites in first of three missions for OneWeb 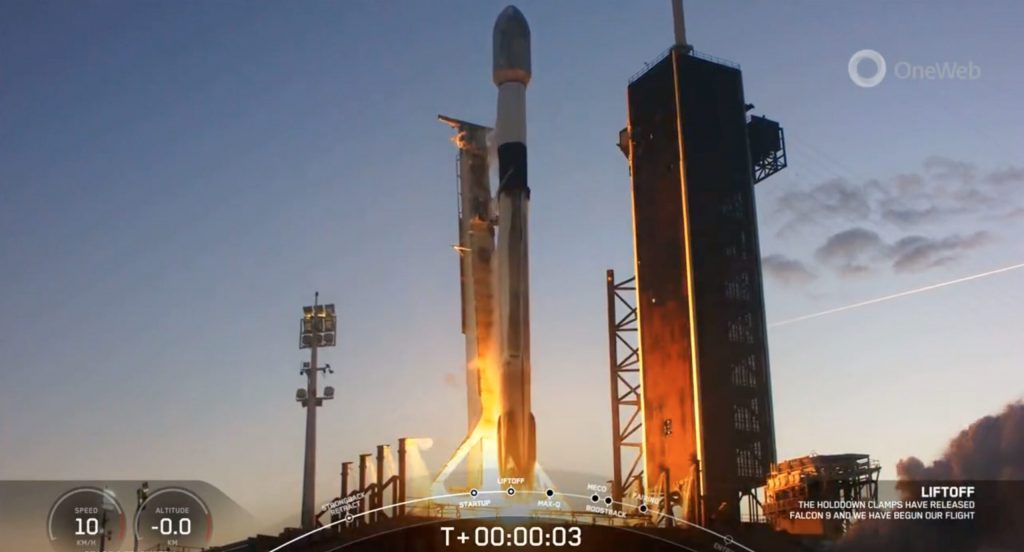 The rocket lifted off from Kennedy Space Center, Florida, at 5:27 p.m. Eastern and released the satellites over three separation sequences about an hour and a half later.

Mission success! We are delighted to report we have made contact with all 40 satellites from #OneWebLaunch15 🚀

We now have almost 80% of our LEO satellite fleet in orbit.

It will take about 100 days for OneWeb’s latest batch of satellites to reach their final LEO destinations to begin services, according to OneWeb chief commercial officer Stephen Beynon.

Once online he said the satellites would expand the operator’s constellation into the southern hemisphere while improving the density of coverage to the north.

The satellites would enable coverage across “a substantial part” of North America, he said in an interview, where the operator has a distribution agreement with telecoms giant AT&T.

SpaceX’s first launch for OneWeb was delayed from Dec. 6 to allow for additional pre-launch checks.

A similar reason was recently given for pushing out the Falcon 9 launch of a Japan-based ispace’s lunar lander by four days to Dec. 11.

The mission is the first of three dedicated Falcon 9 launches that OneWeb booked in March, shortly after an agreement with Arianespace to complete its constellation with Russian Soyuz rockets was suspended amid Russia’s war in Ukraine.

OneWeb also booked two flights with New Space India Limited, the commercial arm of India’s space agency. The first of these two missions enabled the operator to resume its launch campaign Oct. 22 when 36 OneWeb satellites were deployed on a GSLV Mark 3 rocket from India.

Beynon said it had not been decided whether its next launch would be with SpaceX or India.

SpaceX has launched 55 missions this year, and more than half of them were for its LEO broadband constellation Starlink.

While the British operator’s launches were on hold, SpaceX branched Starlink out of consumer broadband households into the enterprise and government markets that OneWeb is also targeting.

Starlink has also expanded its strategy from only selling directly to customers to also using distributors, similar to OneWeb’s growth strategy.

However, Beynon said OneWeb sees growth opportunities by being more integrated with its distribution partners and not directly competing with terrestrial telcos.

“Our goal is to enable the growth of our distribution partners,” he said, by being “a core part of that inside their offering,” which he said is different from Starlink’s use of resellers.

The latest launch gives OneWeb 504 of the 648 satellites in its proposed LEO constellation.

Only 588 satellites are needed to provide global coverage, Beynon said, and the remaining satellites will form a mix of in-orbit and ground spares that the operator has yet to determine.

He said OneWeb expects to complete its remaining launch missions “early next year” to provide global services by the end of 2023.

While SpaceX will be instrumental in this, and OneWeb “couldn’t be happier” with its launch service, he said their collaboration is “not a precursor to any bigger cooperation between us.”

SpaceX has launched more than 3,500 Starlink satellites to date and recently received partial approval to start deploying a second-generation constellation.

This article was updated Dec. 8 after OneWeb announced it had confirmed signal acquisition on all 40 satellites and to correct the landing site for the Falcon 9 first stage.