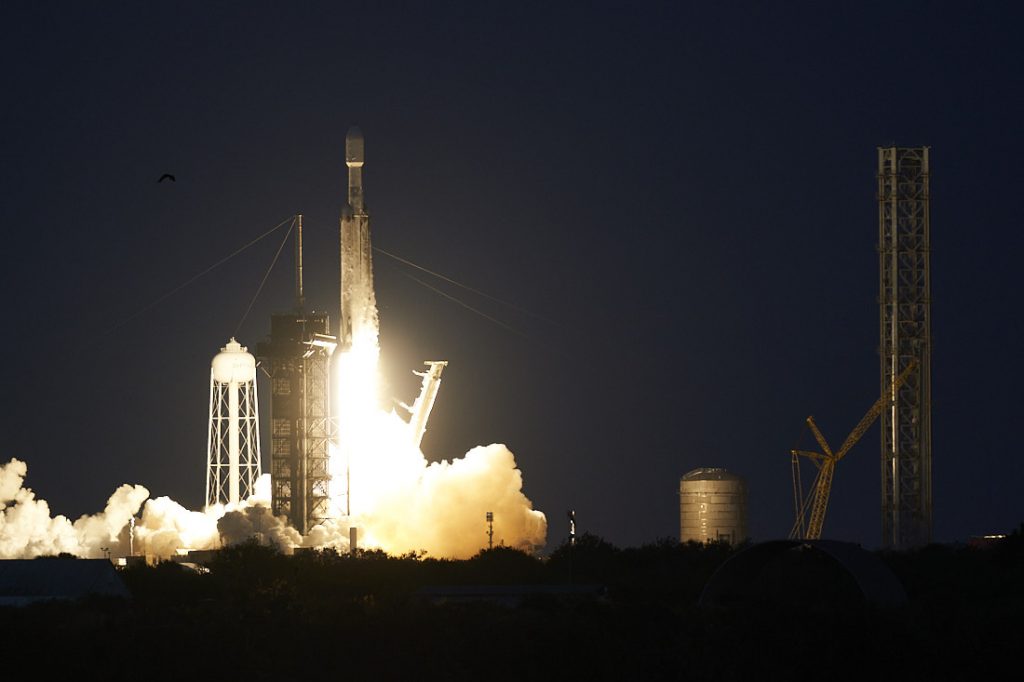 USSF-67 was the Space Force’s first national security mission of 2023 and marked Falcon Heavy’s fifth flight since its 2018 debut, as well as its second national security space launch following the Nov. 1 launch of USSF-44.

The Falcon Heavy’s first stage is made up of three Falcon 9 rockets strapped together, with 27 engines powering the first stage and one engine in the second stage.

Both side boosters landed back at SpaceX’s Landing Zones 1 and 2 at Cape Canaveral Space Force Station in Florida, about eight and a half minutes after liftoff. These landings marked SpaceX’s 163rd and 164th successful booster recoveries. They will be refurbished for future national security space missions.

The expendable center core was jettisoned into the Atlantic Ocean and was not recovered as the mission’s performance requirements did not allow enough fuel to return the stage back to Earth.

SpaceX ended the live webcast after the booster landings and did not show views of the second stage or the payload at U.S. government request. SpaceX received a $316 million contract in August 2020 to launch USSF-67.

Two of the five are U.S. Space Systems Command smallsats. One called Catcher, is a prototype space domain awareness sensor. The other, named WASSAT, is a prototype wide-area sensor to track other spacecraft and debris objects in geosynchronous orbit.

The other three smallsat payloads were developed by the Space Rapid Capabilities Office, a Space Force organization that performs mostly classified projects. Space RCO spokesperson Matt Fetrow said two of the payloads are operational prototypes for space situational awareness missions and the third one is a data-encryption payload to secure space-to-ground data transmissions.

“Space RCO began working with SSC to identify launch opportunities for these payloads back in 2019,” Fetrow said. The LDPE bus was “a great solution,” he said. “It’s really hard to find a great ride like this.”