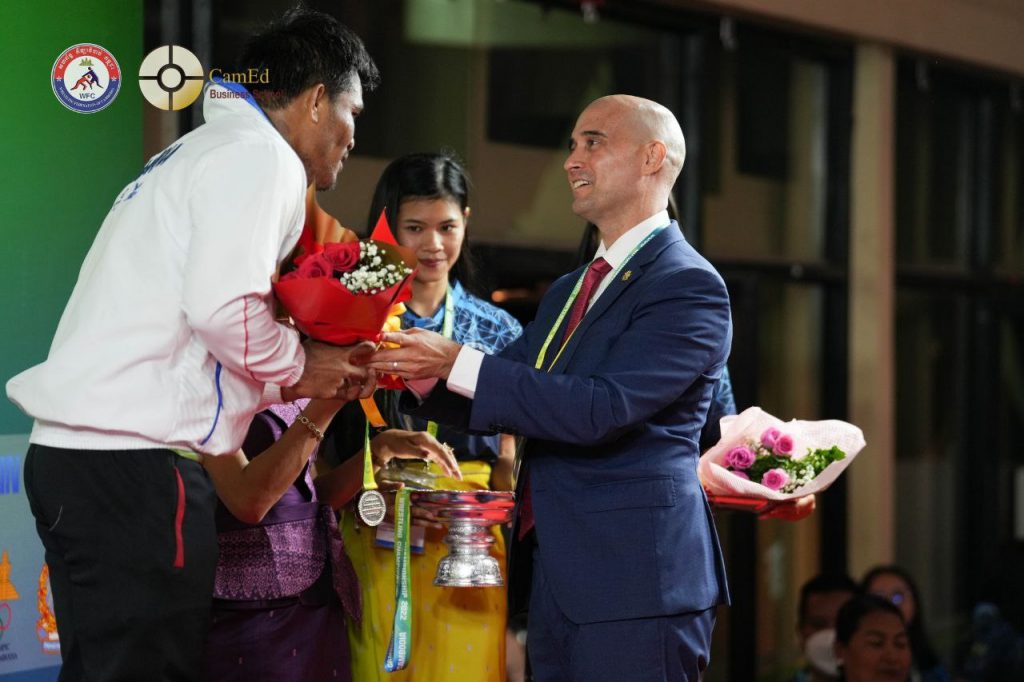 Cambodia bagged 19 medals in the just-concluded Southeast Asia Wrestling Championship 2022, for its best-ever performance in a regional wrestling competition.

Cambodian wrestlers placed third overall, just behind their counterparts from Vietnam and Indonesia.

Vietnam, which also topped the wrestling side of the 2021 Southeast Asia Games, overwhelmed its opponents with a total haul of 30 medals, including 18 golds, 11 silvers and a single bronze medal.

Vietnam has emerged as a wrestling powerhouse in the region. It won 17 of 18 gold medals up for grabs during the 2021 SEA Games, Vietnamese media reported. The remaining old medal went to Cambodian wrestler Sou Bali.

Vietnam’s tally was far above that of second-place Indonesia, which only managed to win six golds, nine silvers and three bronzes.

With 19 medals in all, Cambodia had a one-medal edge over Indonesia. But it was relegated to third place, with only three golds to show after three days of competition.

“Cambodia won 19 medals in the 2022 Southeast Asian Wrestling Championships, the most ever,” Wrestling Federation of Cambodia (WFC) Vice President Casey Barnett said. “We hosted the largest wrestling championship in Southeast Asia, with over 200 international athletes and delegates.”

The tournament also featured teams and athletes from the Philippines, Laos, Thailand and Singapore. Myanmar, Brunei, Timor-Leste and Malaysia were not represented in the Southeast Asia Wrestling Championship 2022.

Laos did not register a single medal during the entire tournament, a feat that was surprising considering the country’s performance in the previous SEA Games.

Phonexay Phachanxay (125kg) and Latxomphou Oday (76kg) won a couple of bronzes for Laos in the Vietnam SEA Games.

The Royal University of Phnom Penh (RUPP) hosted the tournament from December 16 to 18. The participants competed in both Greco-Roman and Freestyle wrestling.

A top Iranian wrestler, who is training and managing the Cambodian national wrestling team, said he was impressed with the performance of his wards.

“I am very impressed with our national wrestlers,” said Komeil Ghasemi, who has been tapped to lead and train the Cambodian team since October 2021.

A wrestling legend in his home country, Ghasemi won a gold medal during the 2012 London Olympics. He is also a winner of several Asian wrestling titles, per Iranian media reports.

“The performance of our wrestlers is an indication that strategic training along with a systematic discipline can result in higher achievements, and most importantly, a great motivation for other young Cambodians who are a fan of wrestling” he added.