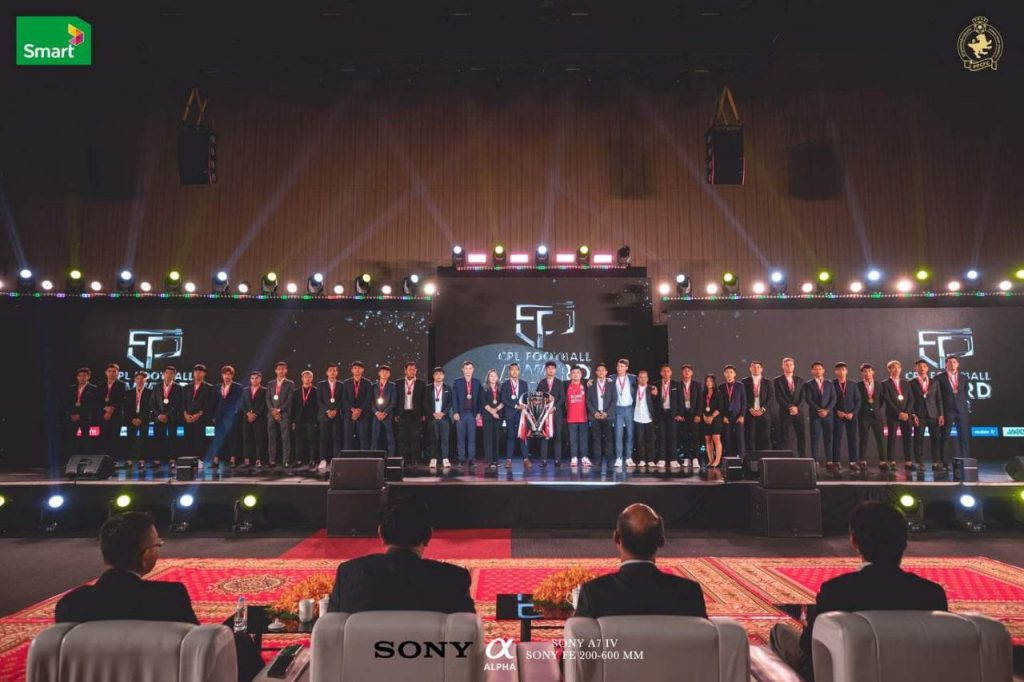 Hosted by CPL CEO and former FC Barcelona alumni Satoshi Saito, the event included many high profile attendees and speakers including General Sao Sokha, Ambassador Extraordinary and Plenipotentiary of Japan to Cambodia.H.E Katsuhiro Shinohara, as well as representatives from all major sponsors at the meeting hall of AEON Mall Two.

A new era for Cambodian Football

The evening began with a speech from Satoshi, where he highlighted the successes of the new league, stating there had been 229 games during the season, an average of 1.5 million Facebook views a month, as well an overall improvement in the competitiveness of the league.

The second tier of Cambodian football ended their season on a knife edge, with Electrcitie Du Cambodge Football Club (EDCFC) narrowly pipping high spending ISI Dangor Senchey FC and National Police to not only the title, but also promotion to the top-tier, a point only fully confirmed at this event.

As suspected EDCFC coach Tun Saray deservedly picked up the best coach of the year award after leading his side to the title, despite the team working on modest budgets and not fielding any foreign players.

The golden boot, as well as player of the year award went to Cameroonian striker Louis Willy Ndongo of Asia Euro United.

Other awards included best young player (under 22), best keeper, best referees as well as the obligatory fair play award, which went to bottom placed club Ban Teay Meanchey FC, to accompany their  “wooden spoon”. Sadly it looks like they will not be competing again next year.

But of course the main event was the Cambodian Premier League Awards, where the best of the best of the CPL were awarded for their efforts during the season. As expected champions Phnom Penh Crown dominated the ceremony, with Ukrainian Oleg Starynskyi being named coach of the year and Lim Pisoth  winning the young player of the year award.

Markus Haber of Preah Khan Reach Svay Rieng FC was another big winner, netting not only the Golden Boot with 25 goals, but also making the best XI of the season, as well as player of the year within that 11. Despite the recognition the awards will be bitter sweet for Haber with PKR Svay Rieng seeming to be destined for the title under their late collapse, a fate he also suffered in 2021 with Visakha FC.

To read our interview with Markus Haber click here.

Other awards included best goalkeeper, referees and the aforementioned team of the season, the first of its kind in Cambodian football. And of course there was the fair play award, which went to 4th placed Boeung Ket FC.

Were the Cambodian Premier League Awards a success?

On the face of it at least they certainly were, with Satoshi assumedly extremely happy with the attendance of all 20 clubs, as well as the pomp and ceremony of what was genuinely a great event.

As with anything though there were still questions that were left unanswered at the end. The sponsors, which include MetFone, Panasonic and Suzuki were all thanked for their payments in kind, although the league has as of yet failed to find a main sponsor, or sell broadcasting rights.

Coach Honda was conspicuous by his absence, again throwing into question the wisdom of having a part-time coach not based in the country, no matter how high profile, or famous they may be.