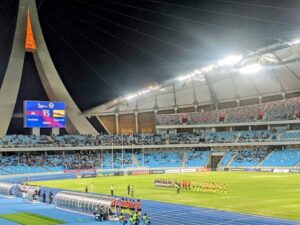 Football is the most popular sport in Cambodia and with the adoption of the new Cambodian Premier League, the game is now moving in a much more professional direction. But what is the situation regarding football stadiums within the country?

Football Stadiums of Cambodia – the Good, the bad and the very ugly

The most prestigious stadiums are the two national stadiums. Phnom Penh Olympic Stadium was the best in the country, however that changed when China invested $160 million and built the Morodok Techno National Stadium.

Below are the eight club stadiums of the Cambodian Premier League. While they can all host a football match, they differ greatly in quality.

Finally, we have the CPL 2 stadiums, as well as stadiums where provincial teams play. Some of the provincial fields are actual stadiums while others are high school fields. Most of the stadiums covered, I’ve actually visited myself.

Since a rather large injection of Chinese money via a “gift”, we now have Morodok Techo National Stadium. It’s first use came during the ASEAN Football Federation Under-23 tournament, where Cambodia played terribly!

Before this, the national stadium was Phnom Penh Olympic Stadium. Lately, the Prince Stadium, with a capacity of 7,000, has also been used to host international matches more recently.

The Morodok Techo National Stadium (Khmer: កីឡដ្ឋានជាតិមរតកតេជោ) is a Chinese-built stadium that cost an estimated $160 million. The stadium can host track and field events as well as football and is far enough from the city center to warrant a $10 round trip tuk-tuk ride from the capital. You won’t be able to find a Grab here.

The stadium looks great but could use some concession stands. There’s street food outside, but nothing inside. The impressive stadium can pack in up to 88,000 people, but it loses points due to its location and overall vibe.

Renoir has it the stadium will be privatized after the games, meaning potential new tenant from the second tier. Yep you read it here first.

The National Olympic Stadium (Khmer: ពហុកីឡាដ្ឋានជាតិអូឡាំពិក) has never held an Olympics event and has most recently been used as a centre for Covid-19. Built in 1963, the stadium definitely has a very dated feel. We won’t dwell too much on here due to the aforementioned article, but this place was pivotal in getting North Korea to the 1966 World Cup, so it holds a special place in our hearts.

To read about North Korea qualifying for the 1966 World Cup Click here.

Cambodia recently revamped its leagues to include a licensing system, with the top tier being CPL 1.

You can read about CPL 1 here.

CPL 1 consists of eight teams and eight stadiums. I have personally been to all of them but one. Some, such as the Prince Stadium, are very good, while others don’t even have proper floodlights to illuminate the pitch.

The RSN Stadium is named after club owner Rithy Samnang, and his Phnom Penh Crown side are the current league champions. The stadium was used for the 2021 Hun Sen Cup Final, which was won by Visakha.

It has an estimated capacity of 5,000, with a great club shop, but little in the way of refreshments.

Svay Rieng Stadium (Khmer: កីឡដ្ឋាន ខេត្តស្វាយរៀង) is home to Preah Khan Reach Svay Rieng FC who finished runner-up in both the league and cup last year. The biggest and best of the provincial stadiums, it has a capacity of 2,150, excluding the large open area that can be fenced off for fans at big games.

You won’t find a c club shop here, but at least one or two street food stalls appear at each game, even the provincial matches.

And for the provincial matches we get to do a little update! If the big team and the small team play on the same day then Svay Rieng Province FC move to Svay Rieng High school. If you have trouble finding it, it is next to the prison….

This is probably the second-best stadium in the country and is definitely the best club stadium. It can hold 7,000 fans and is heavily influenced by sponsors Price Holding Group.

Visakha and Prince put on a great show at home matches, with it being one of the few stadiums to offer beer (Prince of course), and even the opportunity to sign up for a Visakha branded Prince Bank card.

This club is reportedly building a big stadium in Kampong Speu, but they’ve typically played at the Olympic Stadium, as well as the Old Army Stadium of late.

This stadium is home to Boeung Ket Football Club (Khmer: ក្លឹបបាល់ទាត់បឹងកេត), one of the most successful teams in the country. Covered on three sides, there is no official capacity listed, but it’s estimated to be about 3,000.

The stadium is situated in a great location, offers plentiful street food, and has a very decent club shop.

Actually home to the Tigers, and Soltilo of the second-tier. It’s a nice stadium with a capacity for around 5,000 people, although it lacks floodlights. The stadium has a great central location and a good club shop just outside. There are shops nearby, but there’s not much in the way of food or drinks. Note this has since been named the Hanuman Stadium for sponsorship reasons, but until it becomes fashionable we will keep calling it the SRU Stadium.

It’s the most important stadium in Siem Reap and you can read more about watching a match there here.

RCAF Stadium, also known as the Old Stadium or Lambert Stadium, is a true Soviet Relic. Capacity estimates have varied from 8-20,000, but the site is so old the seats break when you sit on them.

It’s in a good location and you’ll find street food vendors on the grounds, but there isn’t a club shop, and there’s no beer in sight.

This isn’t a stadium, rather a field in Takeo. There’s one stand, with a capacity for maybe 500. However, if you consider it has three open sides and is wide open, there’s almost unlimited festival-type capacity to be had here.

This is the worst stadium in the top-tier by far. You won’t food, drinks, or a club shop.

Five of the 12 CPL 2 clubs were formerly part of the top flight, so they have decent stadiums. In actual fact, stadiums here vary greatly, with some clubs sharing pitches and others using high school fields.

The worst stadium in Cambodia. A field with one stand for a few hundred people, some porta-potties and it’s located in the far reaches of Kandal. The official capacity is unknown, but it’s safe to say the pitch is never full.

To read about the worst stadium in Cambodia click here.

Located a short ferry ride from Phnom Penh in Kandal, this is a wonderful stadium that lacks a club shop but has a great sari-sari-type store for snacks and drinks. It’s one of the best stadiums in the division and better than a few top-flight ones.

This one is truly weird, as it’s located in a power plant. It has stands on both sides, with one side being fairly decent and the other being standing only. It could host about 2,000 at a guess, and nearby houses offer views of games from their balconies.

There’s no club shop, but there was one hawker outside selling drinks and even sold me a shirt when I asked. Can’t get fairer than that.

At this stadium, there’s one stand with an official capacity of about 1,000. More fans can fit in the open areas around the pitch. It’s not that bad, and not that good either. Prey Veng though? Well, it’s my guess that you would not want to live there.

To read our guide to Prey Veng click here.

As covered above, they share their pitch with the Angkor Tigers.

The one and only time I have seen them play was at a high school. The school had a psued-stand and lots of space for kids to watch. It’s hard to guess a capacity. The team could be building a new stadium since they’ve gone professional.

Bati Youth Football Academy (Khmer: សាលាបាល់ទាត់ជាតិយុវជនបាទី), also known as the National Football Academy, is an under-18 football team operated by the FFC (Football Federation of Cambodia). It’s unconfirmed where they will play in 2022, but previous matches were held at the Bati Football Academy – a ground I have not yet visited.

Actually known properly as the Siem Reap Stadium, or the “Old stadium”. A bit out in the boonies, but at least I can now say that I have been here. Has a lake on one side and the seats look like they were made from the same rocks as Angkor Wat. Very cool place and recently broke the attendance record with over 3000 fans. Alas the last match had but 300 people and they lost 6-0. You can read about that here.

This is another stadium I have yet to sample, but it’s in Phnom Penh and apparently has a capacity for 500 people. Have recently been spotted playing at the Cambodian Airways Stadium, where they were also selling shirts. A promising club who are likely to build their own ground one day.

I’ve not been to this stadium, but it’s another high school ground, rather than an actual stadium.

There’s not much information out there about this ground, but it’s likely another high school gig.

Best of the rest

Last but not least, here are some of the stadiums of provincial cities and towns I have visited. These three locations are prominent in Cambodia, but none of them yet have a top-tier club.

The stadium has a stand, a proper ground, and floodlights. They even have people in the hundreds turning up for games. One day, an angel investor might step up and really revamp the stadium, giving stoners and soccer aficionados alike the chance to experience something new in Kampot.

This one’s a high school that attracts lots of fans during matches, mostly students. A guy came up to me at the ground and said “It is crazy we do not have a top team in Sihanoukville”. He was very correct. You’ll also find great food if you ever make it for a match.

Kep Stadium has one stand that fits about 500 people, a proper gate, and locations for TV cameras to set up and film matches. It’s nicely located within walking distance of the Kep seafood market. The stadium is relaxed like the city but don’t expect much to happen here for the time being. I have been here, but alas it is the one photo I am missing!

You can read about Kep Seafood Market here.

Biden to End COVID-19 National Emergencies on May 11