A brief history of Football in Cambodia

We take a look at the Cambodian football from 1933 to the current Cambodian Premier League. 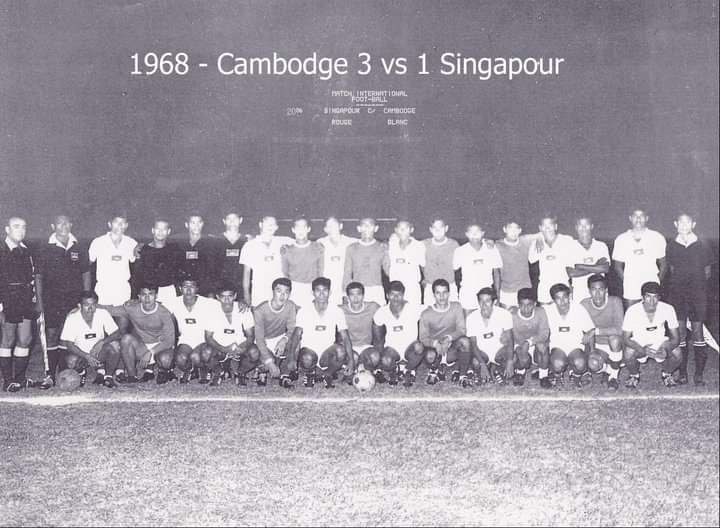 As was common with many former colonies football was introduced to Cambodia by their French overlords. The precursor to the Football Federation of Cambodia being formed in 1933. FIFA were accepted the Kingdom’s entry upon independence in 1953, with their first international match being a 5-2 loss to what was then known as Malaya.

The early history of Football in Cambodia

Between 1954 and 1972 the Kingdom of Cambodia mainly played friendly matches as it sought to consolidate football in the country, whilst in the midst of a bitter civil war.

During this period Cambodia did not participate in either World Cup, or Asian Football Confederation qualification matches.

They did though ironically help play a part in he qualification of North Korea for the 1966 World Cup, which you can read about here.

Football in the Khmer Republic

In 1972 Lon Nol deposed Sihanouk and the Khmer Republic was proclaimed. Whilst having enormous political ramifications, it would also act as the catalyst for a golden period for football in Cambodia.

Cambodia managed to qualify for the 1972 AFC Asian Cup after beating Hong Kong. Their first and indeed only qualification for a major tournament. After winning one of their 3 groups matches, against Kuwait, the Khmer Republic qualified for the Semi-Finals, where they were beaten by Iran. The team eventually finished 4th after losing the 3rd place play-off to Thailand.

Football in the Khmer Rouge era

All vestiges of normal life were completely destroyed by the Khmer Rouge as they emptied the cities in a warped experiment to fast-track the country into a socialist powerhouse within 4 years. The plan was called the “Super Great Leap Forward”.

You can read about the Super Great Leap Forward here

Football in the Peoples Republic of Kampuchea

This resulted into the country moving more towards a Soviet model of governance, both politically and sportingly. In 1982 a national championship was created, which included various state run agencies, the first champions and powerhouse of the time being the Ministry of Communications.

Slightly perversely the international community still recognized the rebel Coalition Government of Kampuchea, meaning the clubs were banned from taking part in regional competitions. The national team was also not recognized and aside fro the odd game against Laos, or Vietnam it did not compete in sanctioned FIFA matches. .

Did the Khmer Rouge have a football team?

As the recognized government of he country and still in control of a rump state centered around Anlong Veng they could have theoretically fielded a team to compete as Cambodia internationally, but there are no records of them competing in any FIFA sanctioned matches.

Anlong Veng is in Oddar Meanchey, who now compete in the Hun Sen Cup, as do another former Khmer Rouge stronghold Pailin. Both of which are largely populated by decedents of the the last of the Khmer Rouge.

Following the relative success of the Paris Peace Accords, UNTAC and the 1993 elections Cambodia again took up its seat in FIFA and a new national team was arranged.

Their first tournament entered being the Tiger Cup, in which they finished last after losing all matches. This did though lead to them to eventually taking part in World Cup qualifying, which first occurred for 1998 tournament held in France.

The Beginning of the Professional Football era in Cambodia

Following in the footsteps of other countries in the region Cambodia decided to replace the existing championship, which was still largely amateur and dominated by state run entities into the semi-professional C-League.

During its 17 years the standard of play improved dramatically in Cambodia, with a number of professional clubs pulling in thousands of spectators per week, foreign stars being brought in and the national team largely improving. Although with that being said they have not managed to qualify for a major tournament during this period.

In 2022 the whole footballing landscape of Cambodia was completely ripped apart, with a concerted effort towards professionalism, competitiveness and development through the formation of the Cambodian Premier League.

The new setup saw the top tier, now known as the CPL reduced from to 8 clubs, but also most telling, the introduction of the Cambodian Second Division, or CPL 2, with 12 clubs.

The success of the new format has drawn both praise and criticism, with the the competitiveness of the top-tier proving popular, but the lack of financial support for second tier clubs, as well as football disappearing from TV screens being at least two of many areas of concern for both clubs and fans alike.

You can read about the Cambodian Premier League awards here.

National Champions of the Peoples Republic of Kampuchea

National Champions of the State of Cambodia

In the 1989 The Peoples Republic of Kampuchea was renamed the State of Cambodia as part of the peace initiative with the Khmer Rouge and other rebel fores. The transitional state was to last until 1993 UNTAC sponsored elections in the country.

National Champions of the Kingdom of Cambodia

Following the restoration of the Kingdom of Cambodia and a return to a fully market economy new teams were to join the league and it was to attain semi-professional status. Quality and attendances remained low, as well as various allegations of corruption. During three seasons there was no completed competition and few teams from the time survived into the professional C-League era.

Following in the footsteps of other formerly Socialist Leagues the Football Federation of Cambodia formed the Cambodia League, or C-League as a professional/semi-professional competition. This was done to help improve the standard of both the domestic competition as well as the fortunes of the Cambodian national team. Both of which have had mixed results. Phnom Penh Crown, Tiffy Army and National Police are the main teams that managed to transition from state owned clubs into the professional era.

2022 saw the latest incarnation of professional football within the Kingdom via the introduction of not just the CPL, but also professional licenses being required for competing clubs.

Due to Cambodia now aligning themselves with the schedules of both Europe and Thailand there will not be a 2023 CPL champion, with the season instead converting to a 2023-24 format.

(As reported by Cambodia Sports Review)