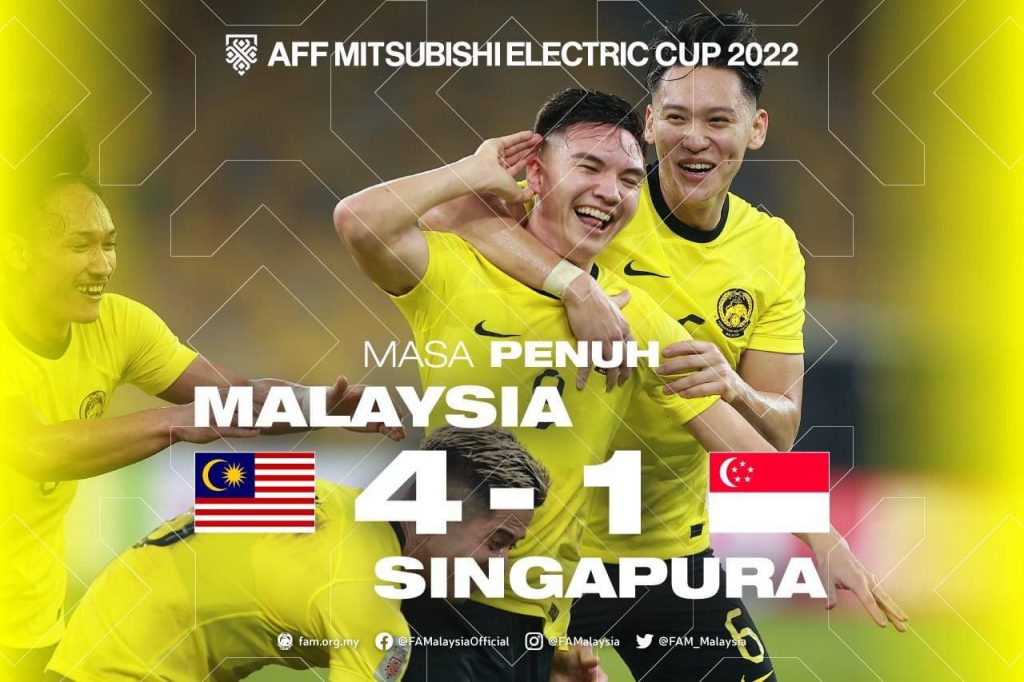 It was all supposed to be so simple, draw and Singapore would go through, but football is not always simple. Instead it will be Malaysia in the last four after they mauled the “Lions” 4-1.

If you were to read Singaporean media before this match you’d have assumed this game was a foregone conclusion, but Malaysia, who the Laos coach among others said were “better” than Singapore had other ideas.

The writing was on the wall from the very start, with goalkeeper Hassan Sunny of Singapore being forced into a number saves within the first 20 minutes.

But there was nothing Hassan could do in the 35th minute, when Shah Shahiran lost possession on the left flank, and Safawi Rasid swooped the ball in for Darren Lok to score a near-post header.

Singapore, who essentially didn’t have a trike force continued to struggle and only produced two chances of note, but they managed to go in at half-time at least still in the game.

After the break though it was goodnight nurse during a 3 minute blitz that all, but killed the tie.

Shawal miscued Hariss Harun’s clearance in the 51st minute, only for midfielder Stuart Wilkin to smashing the ball into the bottom corner. Wilkin was then to get his second after a beautiful pass from Safawi.

After this Singapore simply looked dejected and it took until the 75th minute for them to even register a shot on goal. They did though manage a consolation goal in the 85th minute through Faris, but again it was Malaysia who had the last laugh when Argentinian born Sergio Aguero scored a fourth for Malaysia, and thus securing their biggest win in 20 years.

Malaysia knock out Singapore – what next?

The last 4 will now see Malaysia take on Thailand, while Vietnam will take on Indonesia. If you’re a betting man then a Thailand Vietnam finale is where the smart money is.

For Singapore this was failure, pure and simple.

This article is adapted from BPVE News Cambodia, reported and edited from the great team – Cambodia Sports Review.