Once again insistency has been the hallmark of Cambodia's football endeavors. Is it finally time for Honda to go? 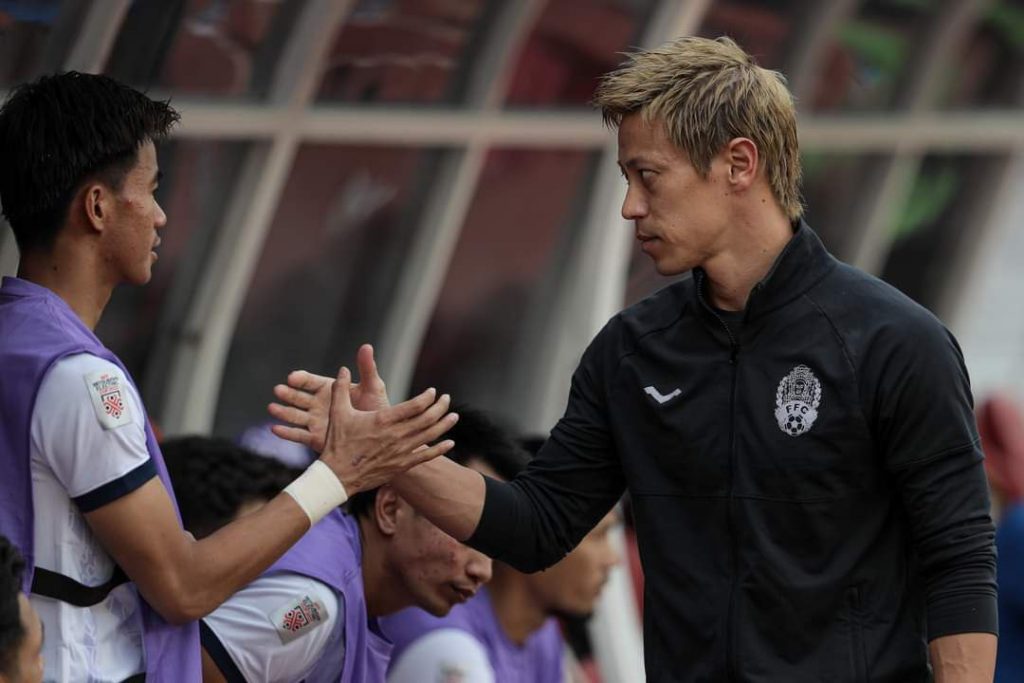 Jubilation over Cambodia’s group stage stunner over the Philippines in the Mitsubishi Cup could be short-lived, as the Angkor Warriors faltered in their second group stage match against the Indonesians.

Outstanding showings by veterans Lim Pisoth, Reung Bunheing and Orn Chanpolin were enough to propel Cambodia to a 3-2 over the Philippines on December 20 at the Morodok Techo National Stadium in Phnom Penh.

It helped that the Cambodians were playing the opener on home soil.

But against the Indonesians, the Cambodian side faltered spectacularly.

What could have been a 6-point spread atop the standings turned into a second-place ranking, with Thailand and the Philippines hot on the heels of the Angkor Warriors. Group A also includes Brunei, which squeezed through the group stage after a stunner over Timor-Leste.

With the game played at the Gelora Bung Karno Stadium in Jakarta, the Indonesians turned their home-court advantage into a 2-1 win over Cambodia.

The ‘heroes’ of the previous game could not maintain their consistency on the pitch, giving the Indonesians a good opportunity to steal the win, albeit narrowly.

Once again, Cambodia was bitten by the ‘bug of inconsistency’ that has bedeviled it for a long time now.

Cambodia or its representatives to international football competitions have faltered more than a few times after leading their group in the initial stages.

For instance, Visakha Football Club, Cambodia’s representative to this year’s Asian Football Confederation (AFC) Cup, failed to advance past the group stage of the tournament, after winning their first two matches in the preliminary round.

To read about the Cambodian Premier League Awards click here

A win or a draw in their final group stage match versus Kedah Darul Aman Football Club of Malaysia would have been enough to send the team to the next stage. Instead, the Cambodian side failed spectacularly, giving the slot to the Malaysian side, which has been trailing the group in the initial phase of the tournament.

Will Cambodia recover this time?

It is still too early to judge Cambodia’s performance in the tournament, considered to be one of the most prestigious in Southeast Asia.

Cambodia has two more games versus the national selections of Brunei and Thailand.

Cambodia will play Brunei at the Morodok Techo National Stadium on December 29. The Angkor Warriors will have the home-court advantage and will be playing against a team that has not beaten them for a long time.

Cambodia has won five of eight matches versus Brunei dating back to 1997. Brunei’s sole win against the Angkor Warriors happened more than a decade ago. Two games between the two sides ended in a draw.

Cambodia’s fourth and final group stage game is scheduled against Thailand at the at the Thammasat Stadium in Pathum Thani on January 2 next year.

This will be a tougher nut to crack, with Thailand having one of the top footballing teams in the region. Thailand has also won most of the games between the neighbouring sides.

The stage is not yet set. But Cambodia is headed to another disappointment on the pitch, thanks to its repeated failure to maintain consistency.