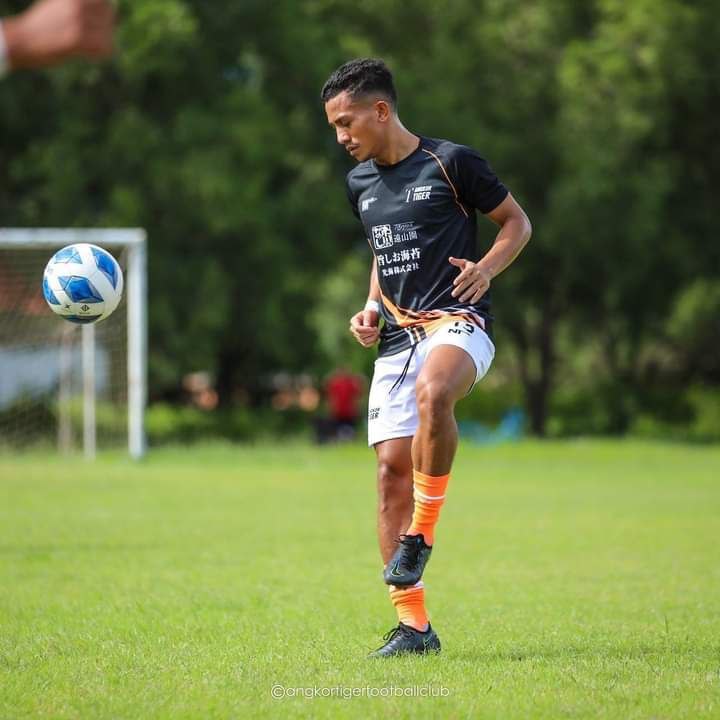 At barely 20 years old Timor-Leste attacker Mouzinho Barreto de Lima was without doubt the standout player of the 2022 AFF Under Championship hosted in Cambodia. During the tournament, he not only not only notched a bunch of goals, but was instrumental in not just knocking out Cambodia, but also leading Timor-Leste to a record breaking 3rd place in the tournament.

As such interest within the Cambodian Premier League was high, particularly bolstered by the more recent closeness between the two countries.

To read my interview the Timor-Leste President click here

I am proud to say that even as a mere journalist I helped play my part in bringing the first Timorese player to Cambodian Football, telling anyone who would listen what a pure talent Mouzinho was. In the end it was Alistair Heath and Angkor Tiger who were to take the punt, with me getting to witness his tearful goodbye to his teammates as he moved away from home for the first time.

To read our interview with Conor Nestor click here

Leaving home to move abroad is no easy thing, particularly when you are just 20 years old, football prodigy, or not. But, settle he did and indeed immediately became a key part of the Angkor Tiger attack, at times viewed the most exciting in 2022.

So, Gareth Johnson and  our newest reporter Aquiles Gusmao went to go tank to Mouzinho

Mourinho how did you feel when you first left home and moved to Cambodia?

I felt really excited to start a new chapter overseas. Like other players, it has always been my dream to play abroad to develop my game further.

I also felt the weight of responsibility to perform well because I realized that I was a foreign player and I knew that if I did well, it opened doors for my fellow Timorese countrymen.

Thankfully, I had the support of my family and loved ones as well as my agents Rookbook Sports to settle in quickly. My Angkor Tiger teammates were also very welcoming and that helped a lot.

You did very well in Timor-Leste, how is the standard of football there?

There is a lot of talent in the country and the standard of football is growing but there is a lot of catching up that we need to do. We currently have not had regular football at the domestic professional league level for a couple of years now and we need to establish a stronger league with better infrastructure.

Thankfully, most Timorese players are hungry and are eager to get better so, with the right framework in place, I know that Timor football can reach a new level.

How was your first season in Cambodian football?

It has been a wonderful experience for me. Initially, it was challenging but I adapted rather quickly despite playing in a less familiar, deeper position. That being said, I’m thankful for Angkor Tiger for helping me wet my feet overseas.

There’s plenty to like! I think the tenacity of the Khmer footballers, high quality of the foreign players and the different styles available. It’s an entertaining league and a provides a good challenge – which is great for my development as a footballer.

What next for Mouzinho? What are the plans for next season?

With regards to my club situation, I can’t reveal much now but I want to continue playing abroad. At the international level, we need to have a good SEA Games and that’s one competition I know we are targeting a good, strong performance as a nation.

Where do you want to be in 10 years time?

My dream has always been to be the best footballer in Asia and I want to ideally be playing in an elite league either in Europe, Korea or Japan and winning trophies regularly. It is no secret that I grew up (and still do) idolising Cristiano Ronaldo. Like CR7, I want to achieve success wherever I go – both at the club level and international arena.

So, there you go Timor-Leste’s best plater should still be in the CPL next year, the big question is where….