Why is the there a Phnom Penh Olympic Stadium when it has never hosted an Olympics? 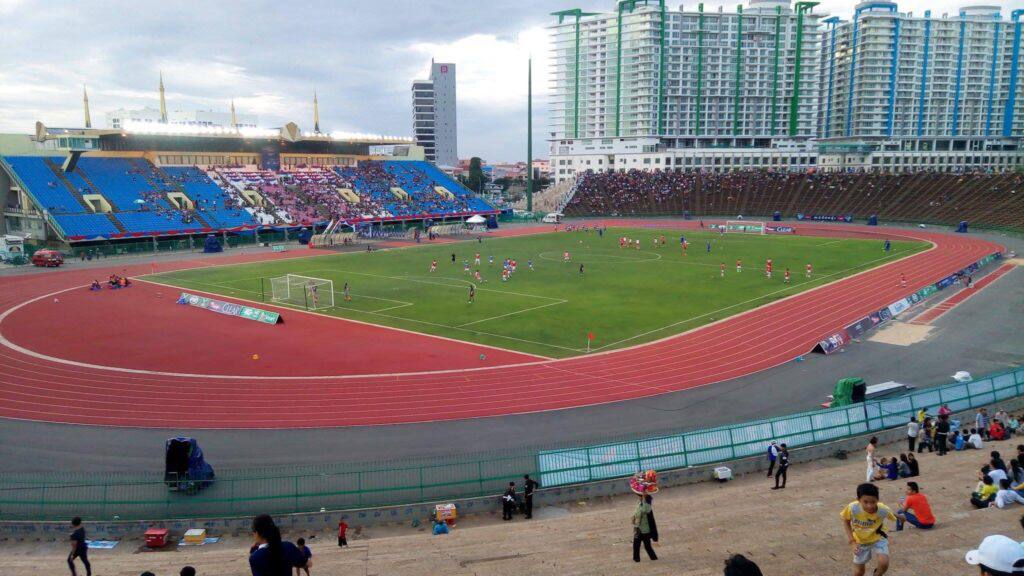 Phnom Penh might have a brand spanking new stadium, with the $1.1 billion Morodok Techo National Stadium (Khmer: កីឡដ្ឋានជាតិមរតកតេជោ), a benevolent gift from China set to host the SEA Games, but this was not always the case. Before that there was the Phnom Penh Olympic Stadium.

The Phnom Penh Olympic stadium, or to give it is more formal title, The National Olympic Stadium (Khmer: ពហុកីឡាដ្ឋានជាតិអូឡាំពិក), is a multi-purpose stadium with a capacity of 70,000.

Now to deal with the elephant in the room, Phnom Penh, nor Cambodia has ever hosted an Olympics, so why the name? Well it might well have been wishful thinking at the time, but the site did end up hosting a number of international events, including an “alternative” Olympic Games.

Construction on the National Sports Complex started in 1963 and was completed in 1964. Originally it had been planned to host the 1963 Southeast Asian Peninsular Games, which was cancelled for political reasons. At that stage Cambodia, still a decade away from Khmer Rouge rule, perhaps was dreaming of hosting an actual Olympics, but things were about to take a turn for the weird and ultimately, the tragic.

The 1960’s were a time of Cold War strife, battles for independence and an increasingly left-leaning East Asia. The Games of the New Emerging Forces (GANEFO) were set up by Indonesia as a counter to the Olympic Games. Officially it was for “emerging”, newly independent states, but in actuality it was dominated by states that bent left (as Indonesia did at the time).

Cambodia despite being a Kingdom enjoyed extremely good relations with both China, North Korea and officially at least followed a Buddhist Socialist program under King Sihanouk. As such? It was also considered part of the club.

GANEFO and the Olympics of the left

The 1963 games in Jakarta were overall quite a success, despite the interference of the International Olympic Committee (IOC). Athletes from the Peoples Republic of China, as of yet unrecognised by the United Nations (UN), dominated the winners podium. Cambodia failed to medal at all at the games.

The 1867 GANEFO Tournament was originally slated to take place in the United Arab Republic, but the games had to be moved for political reasons and were awarded instead to Phnom Penh. Due to IOC pressure the games would only play host to 2000 athletes from 17 nations. Despite that, Cambodia hosted a magnificent event and scored 3rd in the medals table (behind China and North Korea).

Alas it would be the last GANEFO to take place. The next edition was moved from Beijing to Pyongyang as the result of the cultural revolution but would later be cancelled full stop for unspecified reasons.

To read an in-depth analysis on GANEFO click here

This would nor not be the only time the National Olympic Stadium was to shine though.

After various political wrangling, boycotts and other very unsporting disputes, the final regional slot for the 1966 World Cup in England had boiled down to Australia vs North Korea.

Australia had refused to host the North Koreans and weren’t keen on sending their side there either so up stepped King Sihanouk to offer Phnom Penh as host.

The games took place with North Korea spanking Australia over two games. Sihanouk had ordered half the fans to cheer for Australia and the other half to root for North Korea. But it was the style and play of the latter that caught the attention of the fans.

North Korea would famously go on to knock-out Italy before going 3-0 up against Portugal, before a certain Eusebio led one of the greatest comebacks in football history. One that resulted in a final score of 5-3 for Portugal.

To read about how Cambodia helped North Korea qualify in 1966 click here.

The arena would remain important during the golden period of football in Cambodia under the Khmer Republic, but would sadly fall into decline in line with the country. During the Khmer Rouge regime it was used as an execution site for the ex-members of the Lon Nol regime.

It did though manage to survive the Democratic Kampuchea years and as late as 2007 was still being used for international matches. It does though no longer hold the prestige it once did and during Covid was even used as a quarantine center.

Modern cup finals and internationals if not held at the Morodok are hosted at places like the RSN Smart Arena, or  the Prince Stadium, with the old Olympic, much like the Old Army Stadium now looking slightly outdated.

There are often rumours about what the future holds for this prime piece of real estate, but whatever does happen to it, nothing can erase its extraordinary past.